"Rani Haar" as the name suggests is a style of necklace especially made for the Queens of yester- years.
This is a style of necklace in which the neck piece sits very close to the neck. It is sometimes combined with a choker. It has a repetitive pattern with a constant width of at least an inch or so, which will follow throughout the length of the necklace up till the back or the lock of the necklace. 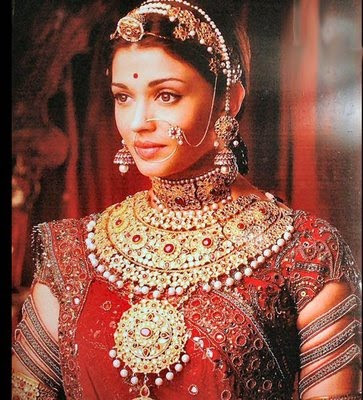 Aishwarya Rai adorned with the true look of Rani Haar in the movie Jodha Akbar. Jewelry originally created by Tanishq
The pattern can be inspired by floral motives or just random setting of kundan or meenakari. The craftsman usually made individual pieces of the repetitive motive and then strung them on a gold chain or raw silk cord. The other option was to connect them via horizontal links. 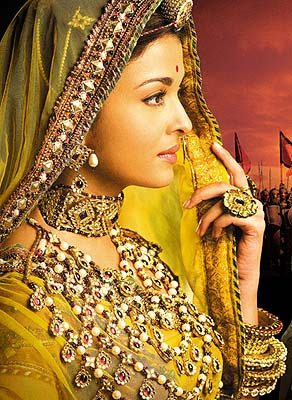 Another gorgeous Kundan rani haar designed by Tanishq for Aishwarya Rai in the movie Jodha Akbar
Originally the Rani Haar was made in Gold and precious stones with very fine finishing of meenakari work on the back but nowadays, you can find imitations in non-precious materials as well. 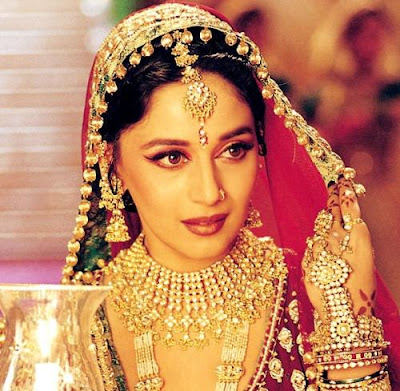 Madhuri Dixit in the movie Devdas wearing a typical set of earrings to match the Rani Haar
The Rani Haar spreads beautifully around the neck and shoulders and looks extremly graceful and rich when worn with the Indian saree. The beautiful necklace when worn with a gown for an evening gathering could also look enchanting. 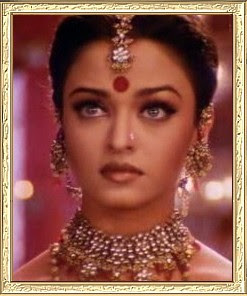 Aishwarya Rai in the movie Devdas wearing Rani Haar with matching Earrings and Maangtikka
The earrings that you would combine traditionally with the Rani haar are usually very long and heavy with a kanauti or decorative supportive chain that leads up and pins up in the hair. But following the current trends and practicality, a Rani Haar would look best when worn with medium weight earrings with the length reaching no more than the chin at max. 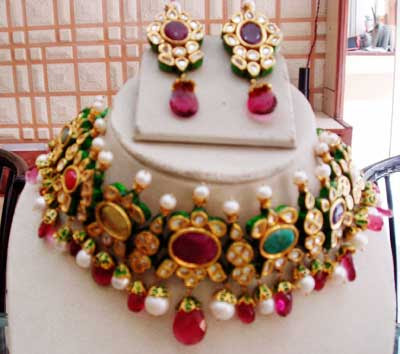 Email ThisBlogThis!Share to TwitterShare to FacebookShare to Pinterest
Labels: Most Popular

Do you wear a mangalsutra daily?

Mangalsutra is a string of beads worn in the neck as a necklace by married women in the Hindu religion as a symbol of marriage. Various parts of India have varying protocols for the structure of a Mangalsutra.

The common thing between all Mangalsutra is the fact that it has black beads or enamel and gold. The black color is to help ward off the evil eye and the gold is to symbolize the power of the woman as Laxmi, the Goddess of wealth.

In North India, the black beads originally black onyx are strung together with a special joint known as the Mangalsutra joint, especially by the Brahmin craftsmen and is believed to be blessed by the Gods. The Mangalsutra joint is actually a handcrafted loop and ball joint which is made very carefully stringing each individual bead on an individual loop of gold and woven into the next loop. This ensures that even if the Mangalsutra happens to break, it will not let the beads fall apart and hence suggests the way a marriage will last through all tough times.

In Eastern parts of India, a Mangalsutra is worn in form of a bangle made out of an alloy of metals which gives it a rich black color. It has a gold casing around parts of it.

In Southern parts of India, the Mangalsutra is called the Thali and can be of various patterns. The most common one is representing Balaji. Some Mangalsutras have 2 discs and a symbol in the middle representing the male to whom the woman is wed. In olden days, even children wore thaalis made out of tiger teeth, tiger nails and covered with gold. The concept was similar, to defend the wearer from the evil eye. It

As a general rule, in India, a Mangalsutra is worn with the same emotion as the engagement ring is in the Western countries.

However, with the changing times, and hence dressing sense and social protocols, most women have accepted an engagement ring as the symbol of matrimony over a Mangalsutra. The Mangalsutra still holds its sanctity as the most important exchange of jewel DURING the wedding ceremonies. The woman still wears this auspicious jewel on major religious festivals such as Karwachauth, Diwali, Holi etc.

But when the Indian woman accepted the Western dress code and gave up wearing sarees to work, she had no option but to give up on wearing Mangalsutras in her daily routine as well. The reason was simple, gold and black beads especially when on a heavy neckpiece, will not go well with a pant suit or a dress suit which calls for more subtle accessories.

Even though I am no judge or advocate in favor of or against the wearing of Mangalsutra is daily wear, I believe that the marriage of two beings happens within the souls of those individuals and the wearing or not wearing of any jewel including engagement rings, wedding rings or Mangalsutras can shake it.

Jewelry should be as comfortable as you would like to be through the day and it is a must that you feel comfortable in all accessories you wear every day. May it be for the look or for the feel, go with the flow and enjoy your Mangalsutra when you decide it is time to wear it.

Nonetheless, for those of you who would anyways want to wear a mangalsutra in everyday without having to live with the 'bold gold' look, you can try some of the following tips;
Posted by Surbhi S Gupta at 8:38 PM 5 comments: